A performative lecture by Parnab Mukherjee

Nonviolence means avoiding not only external physical violence but also the internal violence of the spirit. You not only refuse to shoot a man, but you just refuse to hate him:

I do not for one moment believe that my life would have been wasted, had I not received higher or lower education. Nor do I consider that I necessarily serve because I speak. But I do desire to serve and in endeavoring to fulfill that desire, I make use of the education I have received. And if I am making good use of it, even then it is not for the millions, but I can use it only for such as you, and this supports my contention. Both you and I have come under the bane of what is mainly false education. I claim to have become free form its ill-effect, and I am trying to give you the benefit of my experience, and in doing so, I am demonstrating the rottenness of this education

In fact, it would be good to devise a health index spanning the reform years. One that looks at how both rich and poor have done health-wise. How many years of life, for instance, are taken away from you by ill-health if you are one of India’s less well off citizens? In the world of the media, though, only one index matters: the Sensex. Watching which has spawned a whole little industry in itself. The numbers who pronounce on and debate it (in the media, anyway) are impressive. The oracles reading equity’s entrails for omens. Maybe we need a media relevance index. An MRI scan of mass-produced mediocrity…

Art has a mind of its own. It’s creation, making and unmaking cannot be controlled. It’s desire cannot be fixed to a pointed or a quantifiable measure. It’s effect cannot be quantified into easy markers or reductive signposts. Visual arts: be it canvas, be it moving images, be it kinetic sculpture, be it an immersive installation, be it a durational performance.. all of them individually and collectively are means to look at an unified and a fractured reality.

So, I cannot relax and shrug off the changes around me. I cannot live in a fancytopia. Pretending that these changes do not bother me. I have to re-orient constantly to include the changes in my context.

Latitudes and Longitudes are not imaginary lines, they are a social and political reality. Atmosphere is tangible and invisible and climates affect us, in unknown ways, yet we know more people will perish in future as climate change refugees than by war. Tsunamis. floods, quakes but also inflation and guns have altered geographical terrains and disrupted lives, bodies and memories. We live in an engineered climate today; created and destroyed by diametrically opposite political wills, pointless aggression and practiced perversity, fossilized idea-flow, distant non-grassroot technologies, electrified borders causing fear psychosis, new medical disorders, plastic snowflakes and flowers, staged encounters, torture chambers, overflowing drains and winter- is -the-new-summer. The desire for the new world is conflicted between constant creation and mindless destruction.

Two men meet on the street. They have to make a deal. Or rather they want to make a deal. One has something to sell and the other needs something to buy. The Dealer is unsure what to peddle or would he want to peddle anything in the first place. The Client knows what he has to buy but does not know exactly what to. A cat and mouse game begins between these nameless, faceless, shapeshifters who have to make a transaction which they are not sure why would make. For the next chunk of minutes they indulge in selling and buying of concepts without transacting anything. But they did make a deal.

What are they selling? Or rather who is buying? Are technology, displacement, memories of a genocide the new road-map of the new universe. Are we such theoretical creatures that we have lost the power to engage with real issues and provide a balm to the displaced, destitute, fried, barbecued, roasted human-folk.?

More often than not we are groping for words to describe routine violence. Routine cases of racial profiling.

We are looking at images and we think either they supplement the words or complement them. Is image only a memory tool? Is it just a visual metaphor ? Is it just to learn things by heart ? By rote? What is a performance? Merely a text or an improvisation or ? a series ? of theatre exercises which are prescribed as typical workshop methods? The performance probes into the image -word relationship ? gets into the rationale of images…
What images are we looking at ? ….What was the process of transforming the “us” into “them”….. How are “they” celebrating diversity and “their” culturalness in these times? The performance negotiates these terrains. By the time the performance ends nobody has bought, nobody has sold.

Yet those two individuals have transformed themselves enough to be probably up for sale. As the next set of clients gatecrash into the narrative.

Or do we end up being commodities showcased in the glass windows for the global window shopping….and all this happens while we are window-shopping a product which is a splitting image of ourselves. While we stare at the faultlines.

What do I struggle with these multiple faultlines of memory…I have plugged in my hard disk. Memories float. I have plugged it out now. In this arid landscape, I am trekking with a bag full of 200 terabytes. Ten hard disks of 2TB each, in addition to the 1 TB memory of my laptop and my memories of childhood and those sepia tinted photographs inside numerous albums all over my house and memories of another million snapshots that are etched but never taken. The selective wear and tear of this memory, the convenient modification of this memory and the inconvenient trek of the memory from the deepest pores of angst … all this makes me a memory junkie.

There are so many memories in my backpack. Memories, I plug in. Memories I plug out. Memories with whom I am fighting this boxing match…each of us want to deconstruct dissent. Both thinks that we know the way. Do we? In this scrapheap of broken shards aren’t we constantly bleeding…don’t we realise the extent of the haemorrhage.

What can a memory junkie do? Saving files…text, data, jpg, nef, tif, pdf, scans, more scans, flv, torrent downloads, applications, trial pack … saving and saving more .. so much that accumulation is the key. So much that the micro-emotions of reaching out becomes an easy casualty in this race of knowledgability (sic).

I am tracking and trekking with memories. One day, I will die. Soundless. No bullet. No knife wounds. No heart attacks. No extended spells of coma. Nothing .. simply dropping dead.

Call me a memory martyr.

Art creates people who raise the bar of humane Indicesigher and who commit themselves to a pluralistic culture in a diverse milieu. This performative lecture uses the metaphor of a man searching

In such times, art can be a mirror to make emotions more sensitive. We cannot change the world but we can change OUR world.

A spoken word performer, independent media analyst, curator and a performance consultant by profession, Mr Parnab Mukherjee is one of the leading knowledge consultants and alternative theatre nomads of the Indian sub-continent.

He is an acclaimed practitioner on Badal Sircar’s theatre practice, Shakespeare-in-education and specialises in theatre-of-conflict and theatre-of-the-campus. Having directed more than 161 productions of performance texts including six international collaborations.

He has devised, conceived, designed and directed/collaborated both experimental performances and workshops for a number of institutions, activist groups, support groups, schools, colleges, youth groups and social movements across the country.

A performance text writer and charismatic performer, he has diverse experience in non-proscenium, verbatim, site-specific and physical theatre.

Some of the most memorable productions of the collective include Where is Imphal? (For Birla Academy of Art and Culture), Trilogy of Unrest (Hamletmachine, Necropolis, This room is not my room), River Series (used as a exploratory advocacy tool by UN for Women, UNODC and Kripa Foundation), Only Curfew, Rehearsing Antigone, Raktakarabi-an urban sound opera, Buddha Files, Kasper-dipped and shredded, They Also Work, Dead-Talk series, Conversations with the dead, Crisis of Civilisation, Shakespeare shorts, Man to Man talk, Inviting Ibsen for a Dinner with Ibsen, Your path wrong path and And the Dead Tree Gives no Shelter.
Four of his major workshop modules: Freedomspeak, The Otherness of the Body, Conflict as a Text and The Elastic Body have been conducted with major theatre groups and campuses all over the country.

As a journalist and human rights activist, he has extensively worked on the dynamics of human rights and economic systems of the country. His writings have mirrored the aspirations of the fringe in the nation state especially as into the parameters of economic growth that fails to mirror the widening chasm between the haves, have-nots, have-beens and yet-to-be.

He has developed theatre advocacy tools for international agencies including UNoDC and UN Women and has run a large number of voice-work and performance-training residencies Five of his major workshop modules: Freedomspeak, The Otherness of the Body, Free To See: Reading conflict- as-a-Text,Treading on the Toes and The Elastic Body have been conducted with major theatre groups, visual art collectives and campuses all over the sub-continent.

He has written five books on theatre. And have contributed to a range of publications including Dancing Earth-An anthology of poetry from North East India published by Penguin India, Tehelka, The Spectator-London, Montreal Serai, Imphal Free Press, Chandrabhaga-Cuttack and Hard News. 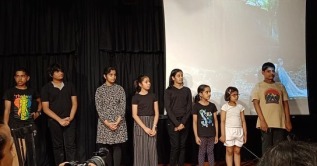 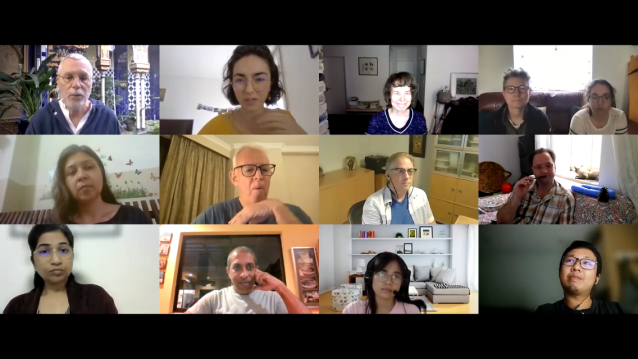 a moment from the Imagined Futures workshop conducted @ NSHM Knowledge Campus in April 2022.
Stories from Punjab, Pakistan of " The lives of water buffaloes " @ ākāśa storytelling workshop.
understanding sound @ Young Monks Theatre classes with Pradip Chatterjee (Bulada).
for more info : https://bit.ly/summeroftwentytwo
Reportage in The Telegraph of 'Walls of Change" project which was a part of Bonjour India festival.
Newspaper reportage of the intervention for Bonjour India festival with graffiti artist Skio .
Telling stories "which don't want to be told "
on ākāśa storytelling workshop.
Culture Monks is very happy to be part of this symposium & project.